My Swedish colleague, Dr Andreas Eenfeldt, has been doing a lot to promote LCHF both in Sweden and abroad. I have spent time with him at the scientific meetings we both attend. He wrote about my research and My Big Fat Diet in his recent book which has become a best-seller in Sweden and which is being translated into other languages. Unfortunately, I don’t think it is available in English, yet. He also did a video interview with me which is posted on his blog and is also available on YouTube (http://www.youtube.com/watch?v=U4y8-1J_Jqw).

A few years back, I was at a scientific conference on pre-diabetes and metabolic syndrome in Barcelona. As usual in these meetings, everything was oriented towards pharmaceutical interventions with little mention of diet. In fact, the only time diet was referenced in virtually all sessions was when people would say, almost robotically: “caused by a high fat diet”. The prevailing meme was that obesity, pre-diabetes, metabolic syndrome and type 2 diabetes were all “caused by a high fat diet”. Finally, at the end of the meeting there was a panel session on diet which I attended, of course. I blogged about this earlier, but to recap, a couple of very prominent nutritional researchers gave talks about the benefits of higher protein diets while disparaging low-carb diets even though the higher protein was achieved by reducing carbs. When it came time for questions I was first to the microphone and suggested to them that the metabolic benefits they has attributed to high protein were more likely due to the fact that they had also reduced carbohydrates and that they should consider going lower on the carbs to achieve even greater benefits. Well, didn’t I throw the cat amongst the pigeons. First of all, there was a ripple of applause in the audience after my comment. Then one of the prominent researchers (from Harvard!) responded with the most venal diatribe against low-carb diets that you can imagine (I found out later that he was actually conducting a trial comparing low-carb vs conventional diet at the time). It was rather remarkable because the level of debate in these meetings is usually pretty good. Perhaps the applause had motivated him to want to nip this insurrection in the bud. Whatever his reasons, I was stunned at this departure from decorum and decided not to respond in kind. When the session ended, and as I exited the room, I found myself surrounded by other participants who were incensed at his behaviour.  The odd thing was that a majority of them seemed to be young, attractive Norwegian women. This did not displease me, of course, as I basked in their sympathy but I recall thinking there must be something positive going on in the nordic world.

Fast forward to today and there is, indeed, something happening over there. In Sweden, Norway and Finland,  low-carb dieting has seen a remarkable revival. A recent poll in Sweden found that 23% of the population was restricting carbs. One of the consequences of this sudden shift in diet is that the nordic countries are experiencing severe butter shortages (you can learn more about this by visiting Dr Eenfeldt’s blog at www.dietdoctor.com). This is a wonderful development in terms of it being an indication of how completely has been the shift in perceptions of fat and saturated fat. I also hope they resolve it so that people can access the butter they need. In the meantime, however, Norwegians can get a pound of butter by paying $2 million krone ($360,000) for a car: 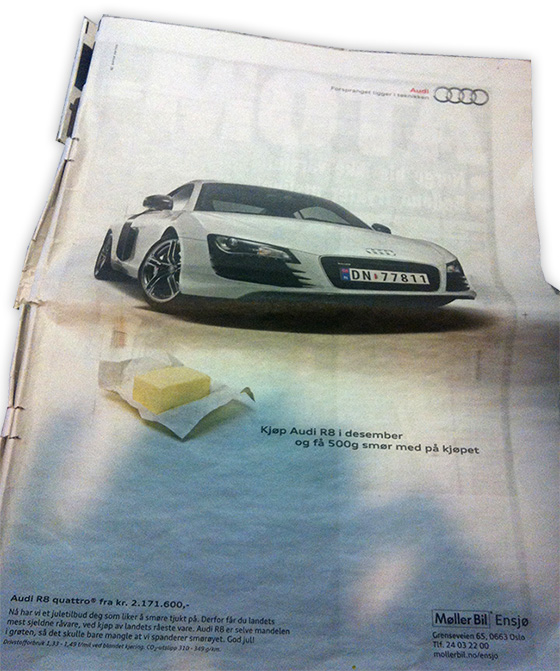 It is interesting to note that the “Ornish Filter” that I blogged about earlier is still alive and well over at the Huffington Post. I have had difficulty getting my comments published on their diet and nutrition articles and this seems to have begun after notorious lipophobe, Dr Dean Ornish, became their health editor. Today there was an article by a regular contributor, Dr David Katz, Director of the Yale Prevention Research Centre, in which he discussed his role as a judge in determining which diets were best for an article in U.S. News and World Report. In case  you haven’t seen this earth-shattering publication, the consensus was that Weight Watchers was the best diet. Other runners-up included the Mediterranean Diet and the DASH diet. Katz goes into a bit of a diatribe about how this is a “ringing endorsement of balanced, sensible approaches to weight control”. He also lauds the Ornish diet which was actually fairly far down the rankings of this little exercise and which, with its extreme fat restriction, could hardly be called balanced and sensible.

Anyway, here is the Katz article if you want to waste 15 minutes of your life that you will never get back:

The reason I write about it today is that I am still amazed at the blatant censorship they practice to silence those who are articulate in defending an opposing point of view. In the past, my pointed but non-abusive comments have been rejected on more than one occasion. Today was no different. I posted following comment:

“I am not surprised that you and 21 other like-minded people voted for WW and rejected diets that are considered to be “wild distortions of a healthful dietary pattern” (except for your friend Ornish’s wildly distorted diet, of course).

About 150 years ago, when the great minds of the day all believed in the miasma theory of disease, the idea that if doctors washed their hands after dissecting a corpse, fewer of their patients would die of peurperal fever was considered to be “wildly distorted” and was rejected even in the face of mounting evidence in its favour.

Eventually, the current consensus that a carbohydrate restricted diet, high in fat and saturated fat, is a “wild distortion of a healthy dietary pattern” will be recognized as a folly similar to that which drove Semmelweis insane for suggesting that doctors should wash their hands.”

Apparently this comment was deemed to be unpublishable in the Huffington Post. I guess they don’t want to be reminded that being part of the consensus is not a guarantee that you are going to be right. Perhaps they are becoming aware of and are threatened by the growing literature that supports a LCHF diet. Perhaps they think my comments are too dangerous for public consumption. Who knows what they think. What we can learn from this is that even people in high places who have access to a bully pulpit are afraid of the truth when it comes to LCHF, so afraid that they feel they have to silence their critics rather than engage in a debate. I guess I should view this as a good sign. Their edifice is becoming so fragile that it cannot withstand too many more pointed barbs. It will eventually collapse into dust but, for the time being, they will do whatever they can in their efforts to preserve their increasingly discredited paradigm. For my part, I will keep poking. Perhaps a comment or two will make it through the Ornish Filter. If not, I always have my blog.

I tried to post a comment on the Huffington Post directing people to this blog to see the earlier comment that was censored. Guess what! That comment was censored, too! These guys are really threatened by LCHF. We may be reaching the tipping point. Stock up on butter!

Studies in the News